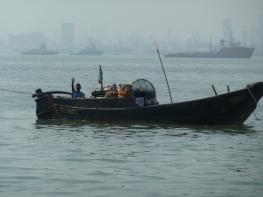 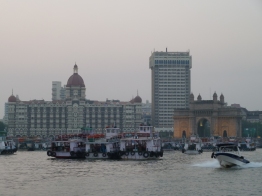 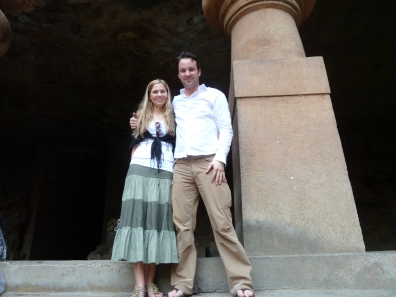 Translated by google!!!
We land in Bombay. The small square in front of the terminal is not very busy, very few people, no cars and only one lane leads to the terminal along. Unusually quiet for the airport a 16 millions. Heavily armed police officers guard the entrance and grant access only with a valid flight ticket. Where are the taxis we wonder? Under a white linen cloth pagoda are little blue toy car of an unknown make. Our taxi driver stow a suitcase on the white roof of the toy cars and secures it with a thin scarf. A case will be transported on the roof across from the slums of Mumbai. I object internally, but say nothing. We can not believe it. We have no other choice. The road into town is worse than anything we have previously seen from a car. People and animals running everywhere, cows, dogs and chickens. Shacks are still the better accommodations. Poverty is shocking, but not offensive. It’s dirty, everywhere, even in the better areas. Is not it a garbage disposal. Comes the taxi stand for once, begging children come to the window and knock on the window, sometimes less sometimes more penetrating and want money. At the Gate of India, the security measures are extremely high, yellow-black concrete separating walls prevent contact on the road, the entire space is protected by a high fence. We have arrived and feel despite the metal detectors and increased security measures remarkably safe. In the evening we are invited to the party of a known Bollywood actor. As a spectator at the hotel! From the lobby, we observe the most beautiful Indian women in saris, the men go uniformly in a tuxedo. Against the colorful saris of the most beautiful western dresses have no chance.